‘That’s one of yours’

This has become a bit of favourite story of mine regarding the US. And I hope anyone reading this realises that it is written with a twist of amusement but there is a slightly serious edge to the blog.

My first trip to the States was in 2003. I had been invited to speak at the First North America Green Roof Conference in Chicago. This of course was a honour and I was looking forward to talking about green roofs, biodiversity, black redstarts etc. However my mind was really on birds. North American birds, migrant wood warblers anything that flew in fact. I arrived four days before the event and spent the whole time out in the wider countryside of Illinois. 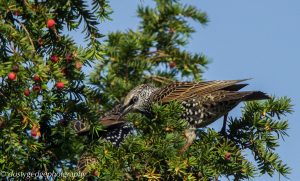 I am forever grateful to then President of the Illinois Ornithological Society who drove me about and showed me the bird delights of both Illinois and southern Wisconsin. Boy was it good.

However we were accompanied by his wife, who was also keen on birds, but was also very keen and active regarding native species. Each day as we were driving the back roads,  she pointed out wildflowers with a strict finger. With a slight disgruntled tone,  she would announce ‘That’s one of yours!’ And so is that’. There might be a few minutes pause before she would decree ‘There’s another one of yours!’

I wasn’t offended in the least but it did get me thinking. Why was I being held responsible for all the dandelions, daisies, chicory and whatever that had spread across the continent and threatened the native flora?

I think it was on the third day and we deep down in rural Illinois near to the Indiana border. We there to investigate a slough and the wife was keen to show me a small plot where they were trying to rehabilitate native prairie floral. It was quite sad really. A small plot of about twenty metres in a landscape that had once been agricultural land. The plan, I think, was to return a huge swathe of land back to native prairie. In the rank grassland surrounding the plot were a lot of ‘my’ plants. And gentle reprimanding and finger pointing began again.

It was then that I gently pointed out: ‘ I have only been in the country for four days. I don’t think I am responsible for all these plants from across the pond. Surely you and your ancestors are responsible? Not me.’ A look of confusion crossed the lady’s face. And she wandered off to consider my retort. Her husband smiled and said ‘Good response’. The finger pointing of course ceased.

And boy did I see some great birds and am forever grateful to them both for their hospitality, generosity and time. Something I have experience throughout North America in the US and Canada.

One final story on this subject. A year later I was in California on the Mines Road to the East of the Bay area. I was watching some Starlings – ‘one of mine’. There was US birder present. And low and behold he said to me:

There was no reprimanding tone, just a matter of fact statement.

With a conspiratorial look around he confided in me –

‘ I shouldn’t really say this, but I quite like Starlings.’

‘They remind me of us americans – come to a continent and take it over.’

This website uses cookies to improve your experience while you navigate through the website. Out of these cookies, the cookies that are categorized as necessary are stored on your browser as they are essential for the working of basic functionalities of the website. We also use third-party cookies that help us analyze and understand how you use this website. These cookies will be stored in your browser only with your consent. You also have the option to opt-out of these cookies. But opting out of some of these cookies may have an effect on your browsing experience.
Necessary Always Enabled
Necessary cookies are absolutely essential for the website to function properly. This category only includes cookies that ensures basic functionalities and security features of the website. These cookies do not store any personal information.
Non-necessary
Any cookies that may not be particularly necessary for the website to function and is used specifically to collect user personal data via analytics, ads, other embedded contents are termed as non-necessary cookies. It is mandatory to procure user consent prior to running these cookies on your website.
SAVE & ACCEPT